I have maybe a weird question and need a bit of advice. The other day I got a Ravelry notification that someone making one of my designs had added a photo. I was super excited because it seems that a lot of the people purchasing my patterns don’t really use Ravelry to keep track of projects. I went to look at the photos, which show the lovely beginnings of a project but the knitting chart is clearly visible in two photos.

My heart immediately sank. My first thought was how to go about asking her to crop her photos or blur out the chart. But I’ve let it stew in my brain too long and now I’m not sure what to do. Knitting patterns are my primary income source, and I’d like to believe most people wouldn’t take her photos and try and use the chart, but I know some might – I probably would.

Is there a kind way to go about bringing this to her attention? It’s probably not an intentional thing, and they are lovely snapshots of her work. I would hate upset this person or lose business from people using her image in place of a purchased pattern. Or is this not a big deal at all?

We’ve officially reached the point in winter that I’m sick of hibernating and desperately want to be outside. I considered buying a full body snow suit just to lay in the sun for a few hours. I no longer care how beautiful snow is – I’m ready for spring.

Here in Illinois we got over a foot of snow last weekend. I don’t think I’ve seen that much snow all at once since I was a kid – when snow meant hours of fun not hours of extra work. I just finished clearing the bottom of my driveway when the plow guy came barreling through piling on another foot of snow. I either looked pissed or pathetic because he backed up and tried to scoop as much as he could back off my driveway. It probably took him two minutes to do what would have taken me another twenty. Sometimes such a small kindness can be so big.

K got a snow day from work so we had a nice long weekend basically being trapped in the house. We were at least smart enough to go grocery shopping before all the snow started so I made a giant pot of gumbo that we ate all weekend. We basically just played video games all weekend and huddled under three blankets and a cat on the couch.

I’ve been trying to take break from knitting (hence the video games). Not knitting makes me really anxious. It’s become so integrated into my life that choosing not to knit is really, really difficult. Having finished the last of my projects helps a little, but my brain is itching to start something new. I’ve been thinking about lace or something summery and light because it will get warm again, right?

Have you ever been a part, or wanted to be a part of a knit-a-long? What was it? If not, why?

I have never done a knit-a-long. I’ve seen them around but they never really interested me, especially the mystery knit-a-longs. I like to know what I’m making before I start making it. I can see where the group deadline dynamic would be helpful for some people, but I don’t often need motivation to knit. I also don’t see myself enjoying ‘knit nights’ or stitch and bitches. I just have too much social anxiety to enjoy that kind of a situation, especially going into it cold. I don’t really hang out with any other knitters. I use knitting as a way to check out most of the time – putting myself in those situations would basically have the opposite effect I’m going for.

Are Anti-Social Knitting Clubs a thing? Can we make it a thing? Like we all just binge watch the same season of something at the same time from the comfort and safety of our beds and couches?

Short one today, but I’m almost through all of the prompts. I can’t believe that tomorrow is already December (and also my birthday…). I’m really not a birthday kind of person, in fact I rather dread them.

Do you knit in public? Was anyone offended/incredibly happy/curious that you were doing so?

For how often I knit in public, this seems to be the only good image. My friend Mel caught me knitting in the wild. We were watching a bunch of our friends make fools of themselves playing a very intense game of beach frisbee one morning.

I take knitting with me wherever I know I’ll be sitting or bored. I’ve taken knitting to family gatherings. I used to take knitting for my 20 minute lunch break. I knit through a history through film class in college (not an unusual thing to do in art school, also see previous post).  I take knitting on planes and have never had trouble getting through security. I once knit an entire baby sweater on a train ride to visit my friend in Michigan. I knit on long car trips. I knit at coffeeshops if I need to be there for any amount of time. I knit in bars.

Most people don’t seem to have any sort of reaction when I’ve knit in public. I’m sure I’ve gotten weird looks but I’ve never noticed since I was in my own little knitting world, which is kind of the point isn’t it? Occasionally someone will ask me what I’m making but usually don’t linger for a chat. This past summer while at my favorite traveling beer garden I was knitting and chatting and drinking my beer like any normal 20-something. The sky ripped open and it started pouring. We weren’t finished drinking so we made our way to the little shelter where the polka band was playing. In the true beer garden spirit, everyone who stayed crammed onto the few tables and started chatting with strangers *gasp*. I kept knitting because I was in a groove. An older lady asked me about the socks I was working on and then talked to my mother about how her mother used to crochet or something (beer garden memories tend to be a little fuzzy) but then left me alone. It’s been my experience that most older people who see me knitting will talk to my mom (if I’m with her) instead of me about knitting or crocheting. For the record she hasn’t made anything with yarn since the 70’s and likes talking to strangers about as much as I do.

While it’s much easier to dick around on my phone for those ‘sitting and waiting’ times, I just find knitting to be a more relaxing and productive use of my time. I don’t think it’s any different than picking up a magazine or bringing a book. It’s definitely not as common anymore but that shouldn’t stop anyone!

Do you have yarn that you love but can’t find a project for?

My best friend gave me this yarn as a bridesmaid’s gift almost three years ago. I like the colors and I love how it feels, I JUST DON’T KNOW WHAT TO DO WITH IT. I’ve mentioned before, fancy yarns hold me up. I also have no idea what to do with variegated yarns. For someone who primarily does colorwork I don’t like not being in control of wear the colors go. I’m afraid of color pooling or weird awkward stripes. I don’t want to waste this yarn on something I’ll never wear or just give away to someone because I didn’t like how it ended up. Even though it’s sock yarn it feels too precious for just socks. I’ve considered buying a another skein or two of a solid color and doing some colorwork with it, but nothing ever jumps out at me when I look online. If you’ve got the perfect pattern for this yarn leave me a comment and let me know! 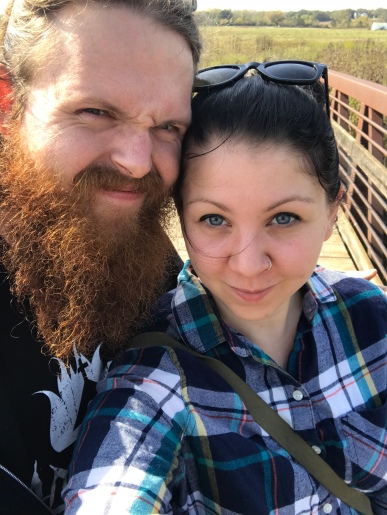 Yesterday the sun came out for like four whole hours in-between the bouts of endless dreariness and rain we’ve been having. The weather seems to be affecting me way more than I’m used to. I’ve been having a lot more panic attacks and days where I just feel like I can’t/don’t want to do anything at all. The Boy and I decided to take advantage of the sunshine – even though he was going on 18 hours of being awake. We drove over to the local nature preserve  and went for a little hike.

Fall weather definitely fucked us up. In our ongoing game of temperature chicken we’ve gotten used to it being pretty cold all the time. We checked the weather before we left – 67 degrees – pretty much the same as in the house. We left with jackets and scarves… Not ten minutes in we were stripped down to t-shirts and sweating our asses off. Despite the swamp ass we had a nice little walk and enjoyed some nature and then promptly took a two hour nap.

Working with each designer's unique voice, for clear patterns and happy knitters.