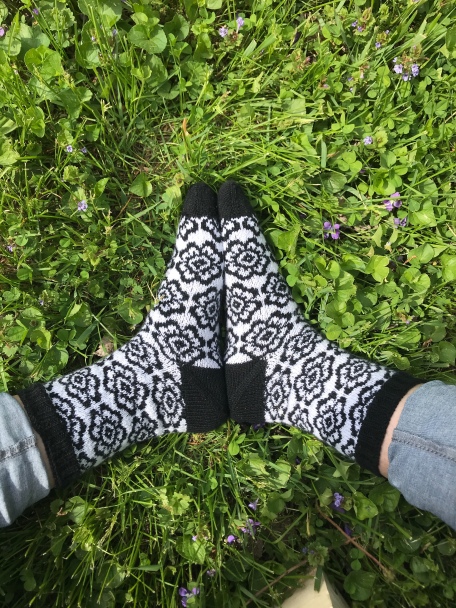 I’ve been busy busy busy actually knitting things since my last post. I finished the Daisy Socks and completely revamped the pattern. The task of editing that pattern was a little daunting and took me several days to finish, though the actually knitting went quite quickly. It made me very aware of how much I’ve actually learned and accomplished in the last two years of writing patterns and has reignited my excitement with the whole design process. I’ve got about ten more patterns that could use an update which will hopefully be a good use of my time during the “slow season” of knitting. 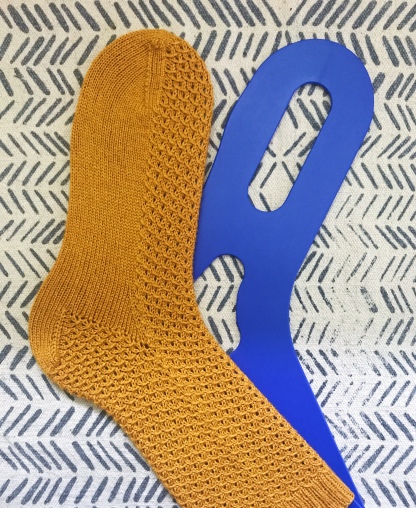 I’m also working on a new pattern for a pair of socks I just finished last night. I managed, with the grace of the knitting gods, to finish them in five days. I’m not sure if it was because I knit them one at a time (which I haven’t done in at least three years) or because they’re only one color, but whatever it was -they just flew off of my needles. They’re hanging up to dry as I’m typing this, and I’ve got the pattern mostly written up in another window. I’m currently debating hanging onto this pattern for a few months and maybe releasing it with a few others closer to the fall. I’ve got a few ideas brewing that would make a nice set with this pattern, but I’m also very impatient and know the pattern will burn a hole in my pocket? computer? while it’s waiting to be published. 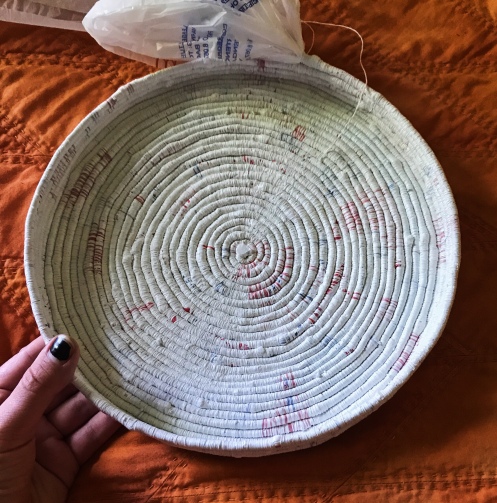 My basket is plugging along nicely and is actually starting to resemble a vessel instead of a “floppy weird frisbee” as K called it. I like working on it, though I have to take frequent breaks from it because it’s murder on my hands, wrists, and shoulder. After two nights of steadily working on it I ended up with a kink in my neck that last for several days and the fun shoot-y kind of pain in my left arm. The process is so repetitive and takes a lot of hand muscle to keep everything pulled taught all the while getting heavier and harder to hang onto. I’ve got so many ideas about how to finish it, except it’s only a couple of inches tall and I’ve got many more to go before it’s ready for a decorative element. I really enjoy how meditative the process is, and it’s given me lots of ideas for more baskets, but it takes so long to make any progress towards a finished product that it’s hard to motivate my monkey brain to finish it. I think it’s going to end up being a long term project that I pull out between all the other things I want to do. 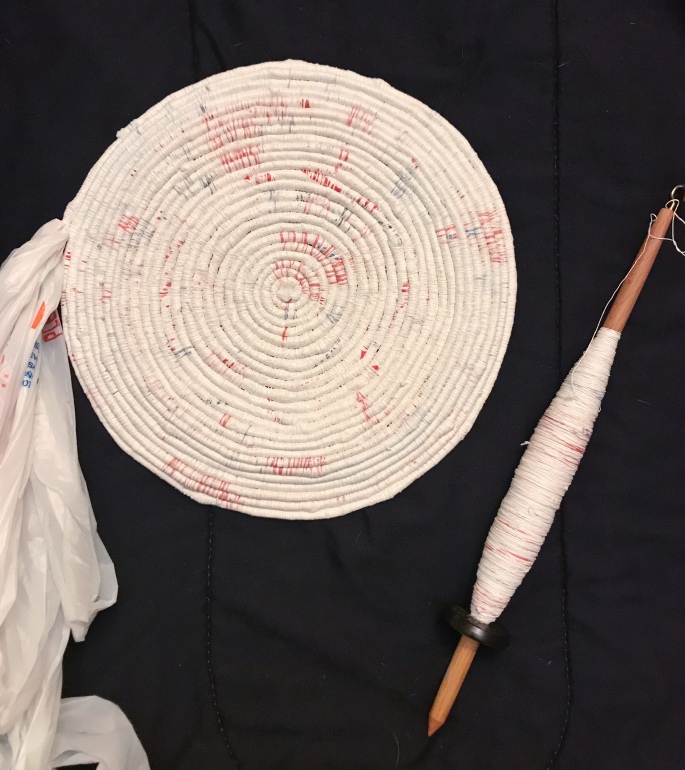 I can’t believe I would ever be sick of laying down, but it sure happened. There are very few things one can do while laying in weird positions on the couch, but crafting is not really one of them. I ended up watching (read: sleeping through) a bunch of boring tv, reading a book I’ve had on my shelf for a few years, and playing some gameboy. I got the all clear from the doctor early last week, so I don’t have to go back every few days – and thank goodness because that was getting a little expensive. The pain subsided a few days after the last visit enough to actually sit comfortably on my couch so I’ve been steadily working on my basket. It’s a little over 9″ in diameter now and I’m hoping to get to about 18″ before I start going up the sides. I ran out of the wrapping thread so I spent the last two nights working on that. I’ve got 7 or 8 grocery bags worth of new thread on my spindle so I’m ready to start wrapping again. It kind of blows my mind how much yardage I’m getting even from one bag, but I wish I would have kept track of how many bags I’m actually going through. I have a feeling I’ll be using up all that we’ve accumulated and then have to wait a while to finish this project.

In other less fun news, we woke up Sunday to learn that K’s cousin had died in a horrible crash Saturday night. It was just one of those freak accidents that you hear about on the news but never think it’ll happen to people you know. She was on a motorcycle ride with her husband and club, several of them crashed and she ended up passing away in the ambulance. K grew up with her son and knows what it’s like to suddenly lose a parent so we ended up rushing over there pretty early in the morning and spent the day with his family. There were already so many people there supporting the family and making sure that they weren’t alone. It was really nice to see everyone come together like that and I’m so glad to be a part of a family like this.

Anyways, I’m going to go enjoy this thunderstorm, be safe, and please watch out for motorcycles. 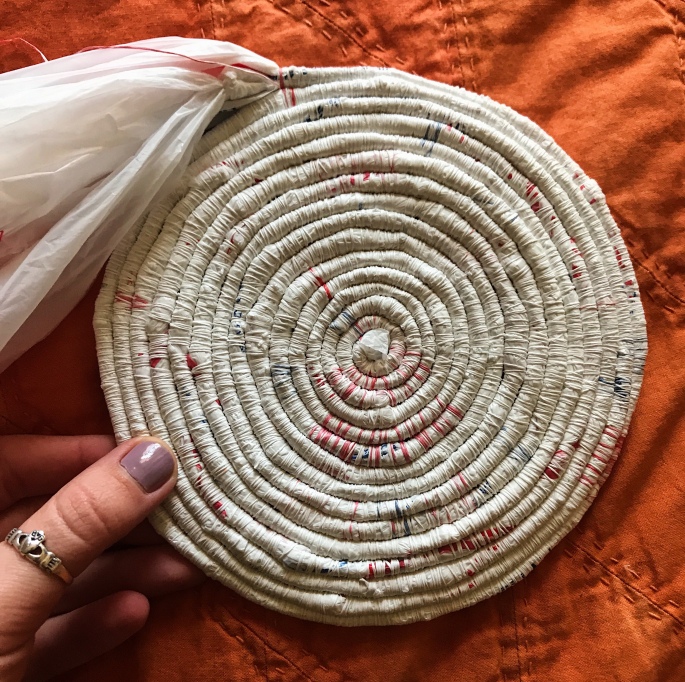 I haven’t been excited about knitting lately but I have been revisiting some old ideas and techniques. In high school I got really into making things with plastic bag yarn, or plarn, which is really such a dumb word. I crocheted a backpack for myself and it surprisingly held up for most of my junior year – and I had a lot of books. After that I crocheted a human spine out of bags for my art class and then haven’t used plastic yarn since. 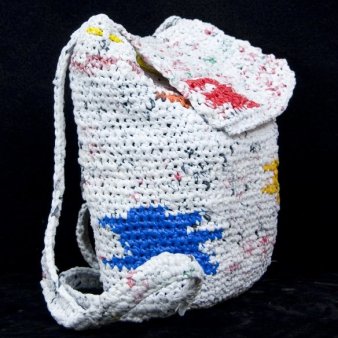 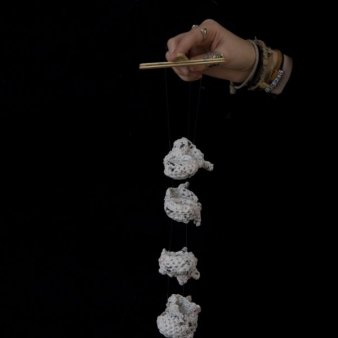 I decided to revisit plastic yarn after seeing a picture someone posted to pinterest of a plastic bag laundry basket they made. As most people do these days, I have an absurd amount of grocery bags stuffed in a bin, and every week there’s more and more. My hoarder brain says they could be useful eventually but there’s only so much cat litter to take out. Anyways, into the plarn universe I delve.

I started by cutting thin strips of bags, stretching them out, and then spinning the strips on my drop spindle to make thread. This process was incredible satisfying and I could probably do it forever. It’s also a really easy way to practice using a drop spindle if anyone is interested in trying that out. The plastic isn’t going to break easily and it’s also free so there’s really no risk. Once I had a good amount of thread made I cut a few bags into thicker strips. By holding 4 strips together I got to my desired thickness and used the thread I made to start coiling.  I’ve made a pretty large dent in the pile of plastic bags already and I’m only about halfway through the bottom of my soon to be basket.

I was reading about ways to remove the logos and how to “dye” the plastic different colors, but for now I like the way the logos create little pops of color.

The intersection of crafting, knitting, cooking, and more!